One of my favorite games of all time, Red Dead Redemption returned with a prequel for consoles in 2018. Then it came for PCs in 2019. I finally managed to play the game and amazed by its graphics immediately. But I got upset because I can barely play the game on medium settings at 25 FPS with a 1050Ti laptop GPU. I know that I don't have a good rig but 25 FPS on medium settings?

Today, we are going to look at some frame captures from the game and try to analyze graphics techniques used in the game.

This isn't an official breakdown of the game. It just me analyzing RenderDoc frame captures. If you want to learn from the actual developers, you can check the slides from a SIGGRAPH talk by Fabian Bauer. Slides (At the bottom of the page), Video (starts at 1:58:00)

You can also read a graphics analysis of GTA5 by Adrian Courrèges here. Since both RDR2 and GTA5 are from the same company and uses the same engine, some of the techniques from GTA5 present here as well.

Another important thing is that, I am not a senior graphics programmer or anything like that. I am still a junior in this field. So, there will be plenty of things that I don't understand. If you find any mistakes or things that can be improved, please reach out to me. Here we go!

Here is the main frame for dissecting: 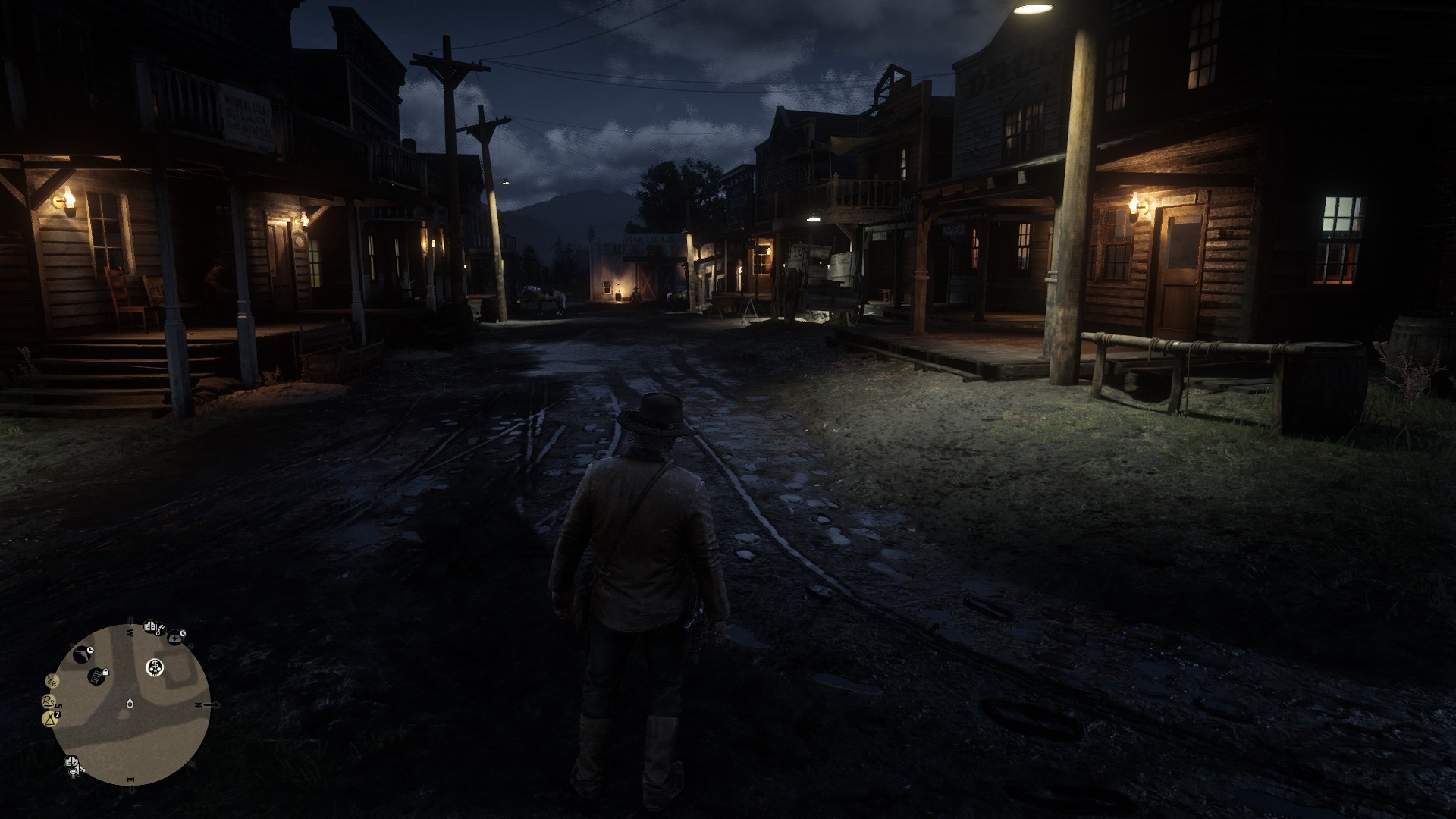 When it comes to a game like RDR2, it's almost impossible to see all the techniques in one frame. It amortizes its work across multiple frames. Because of that, I captured more than a single frame but this is the main one we are going to be focusing on. It contains a lot of properties like; spot and point lights, directional light (it's very subtle but it's there), buildings, NPCs, a horse, trees, vegetation, clouds, etc. It should demonstrate most of the rendering techniques used in the game.

RDR2 is an open-world game that streams data constantly. Because of that, the frame starts with a bunch of tasks like creating and deleting textures, shader resource views, unordered access views, updating descriptors, buffers, etc.

Mud plays a big role in the game. Beside being a game mechanic, it makes envrionments more realistic. The game renders footprint textures of humans and horses into a displacement map along with trail textures of horse wagon wheels. This accumulated texture is used for Parallax Occlusion Mapping when rendering terrain. 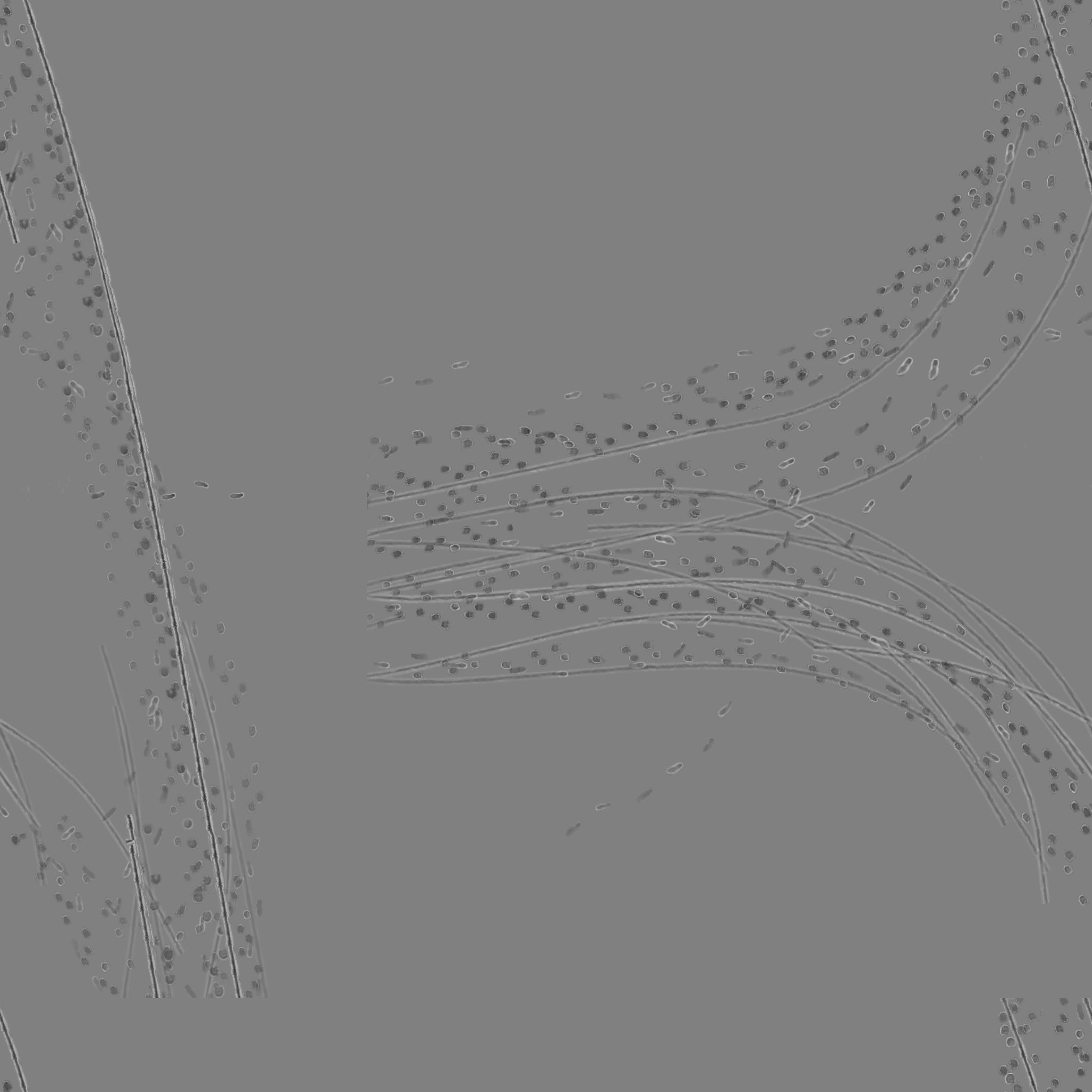 After the mud pass, the game does a lot of work on GPU compute. Most of them related to sky and clouds. Clouds, fog, and volumetrics are RDR2's prominent effects. You can find more information about this stage on Fabian's slides. He explains in far more detail than I could ever explain.

Environment maps are the main source of reflections in RDR2 as well as GTA5. Like the GTA5, RDR2 generates an environment cubemap from the camera position. It generates a thin GBuffer for the envrionment map, similar to Far Cry 4.

Environment cubemap generation in every frame can be a heavy task. RDR2 does some optimizations to reduce the cost. For example, the game only draws static and opaque objects, does frustum culling before rendering each face, and draws lower LOD versions of models. Although, I've found that poly count of the terrain is still very high for environment maps.

The game uses tile-based deferred rendering path for calculating the lighting of environment maps. The light culling and the lighting are calculated together in one compute pass for each environment map face. (thanks @benoitvimont for pointing that out) The game also uses the "top-down world lightmap" technique, similar to Assassin's Creed III, for baked lighting.

RDR2 also loads envrionment maps that located in building interiors when the player is near a building. These are also cubemap G-Buffers streamed from the disk.

The game calculates the lighting of these maps and filters them like the previous ones. It only calculates one baked environment map at a time and only recalculates them when the time of day changes. All of the environment maps are stored in a texture cubemap array. There isn't any cubemap to dual-paraboloid map conversion.

This stage starts with terrain depth prepass and then the game renders scene into G-Buffers.

There is another target is generated from baked data:

This buffer contains baked ambient occlusion in the red channel, the same as in the environment map stage. But there are other channels in this texture. The green channel contains some data that looks like the data in GBuffer 3's blue channel. Again, I don't know what is this data used for. And I can't find any data in blue and alpha channels on my captures. I will investigate this further.

Some games use big shadow atlas texture for shadow maps (e.g DOOM). One of the advantages of that method is shadow map size can vary based on distance. When you use texture arrays, you lose that flexibility because all of the textures in texture arrays must be the same size. RDR2 has 3 different texture arrays for different quality. For example, spotlights have:

Point lights cast shadows in all directions. To deal with that problem, games use a technique called Omnidirectional Shadow Mapping where you render the scene into a depth cubemap from the camera position. Campfire shadows and shadows from Arthur's lantern are rendered using this technique. Point light shadows have 3 different arrays for different quality settings same as spotlights.

Most of the static point lights in the game have baked shadow cubemaps. So, the game uses baked shadows whenever it can and only generates shadow maps when the player is near a light-volume. But things get more interesting than that.

Also note that this texture doesn't cover 360 degrees. But luckily, lights on buildings generally have a wall on their backside and baked shadow maps cover it.

Another interesting thing is that this process is vice-versa. For example, in Saint Denis -one of the biggest cities in the game- the game generates omnidirectional shadow maps for spotlights and copies that data into spotlight shadow map array. I don't know why RDR2 doing shadow mapping like this. I couldn't find any similar technique on the internet.

Directional light shadow mapping in RDR2 is pretty much the same as in GTA5. Cascaded Shadow Mapping with 4 cascades. Each 1024x1024 tile of the 1024x4096(medium settings) texture atlas used as a cascade.

It's finally time to combine all of these environment maps, gbuffers, shadow maps, ao buffers.

This stage contains two passes: The first one is for global light(sun/moon) and the second one is for local lights.

The game renders a fullscreen quad for calculating directional lighting which is moonlight in this case. There is some baked lighting from the "top-down world lightmap" mentioned previously. 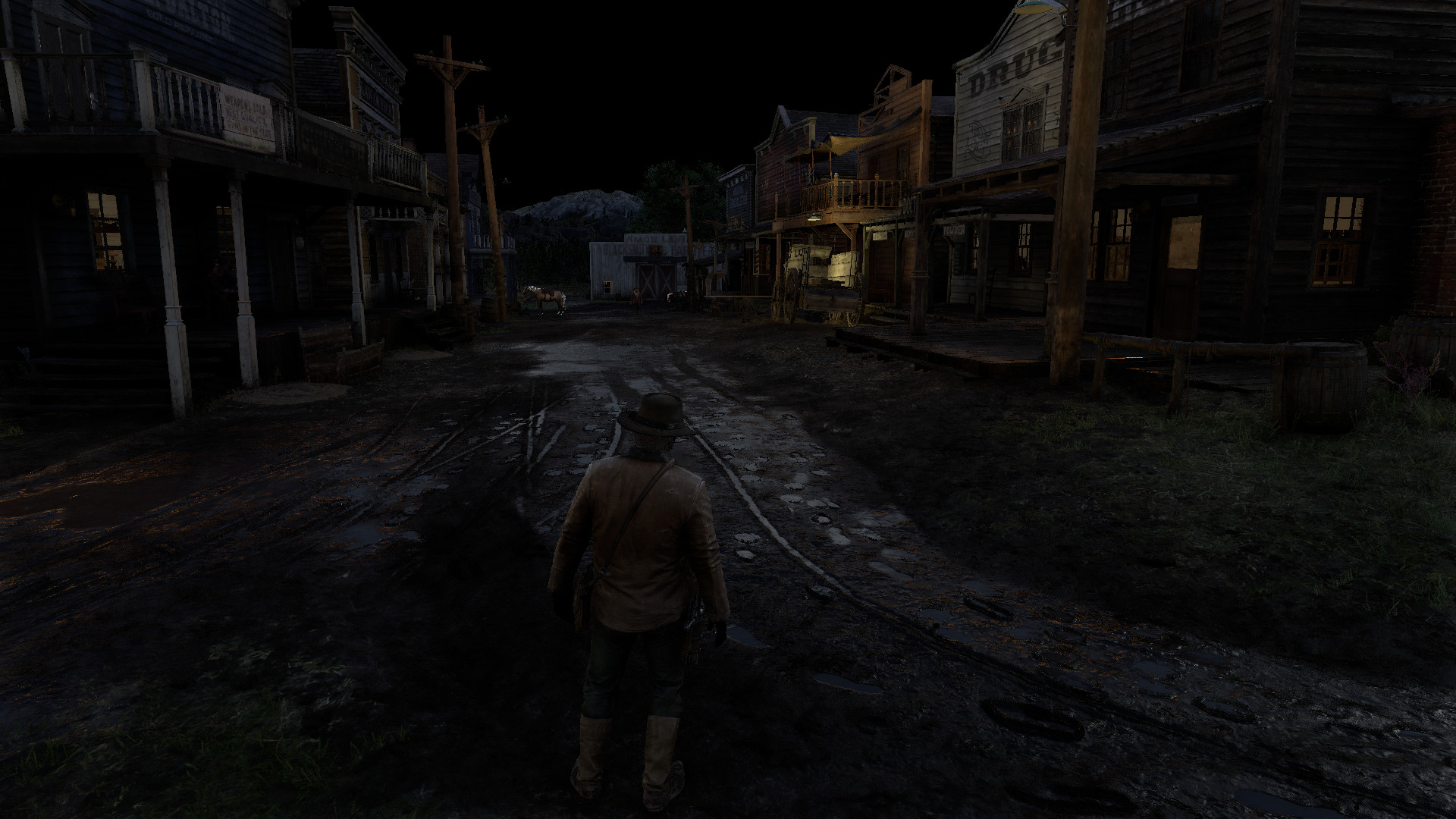 In this pass, the game renders a low-poly sphere shape for point light volumes and octahedron like shape for spotlight volumes. Lights are rendered back-to-front with additive blending.

For avoiding unnecessary shader invokes, the game uses depth bound testing which is an extension feature in OpenGL/D3D11 but becomed native feature in Vulkan/D3D12. It also uses stencil testing for discarding pixels that consumed by translucent objects like window glasses. Those objects will be rendered at the forward pass. 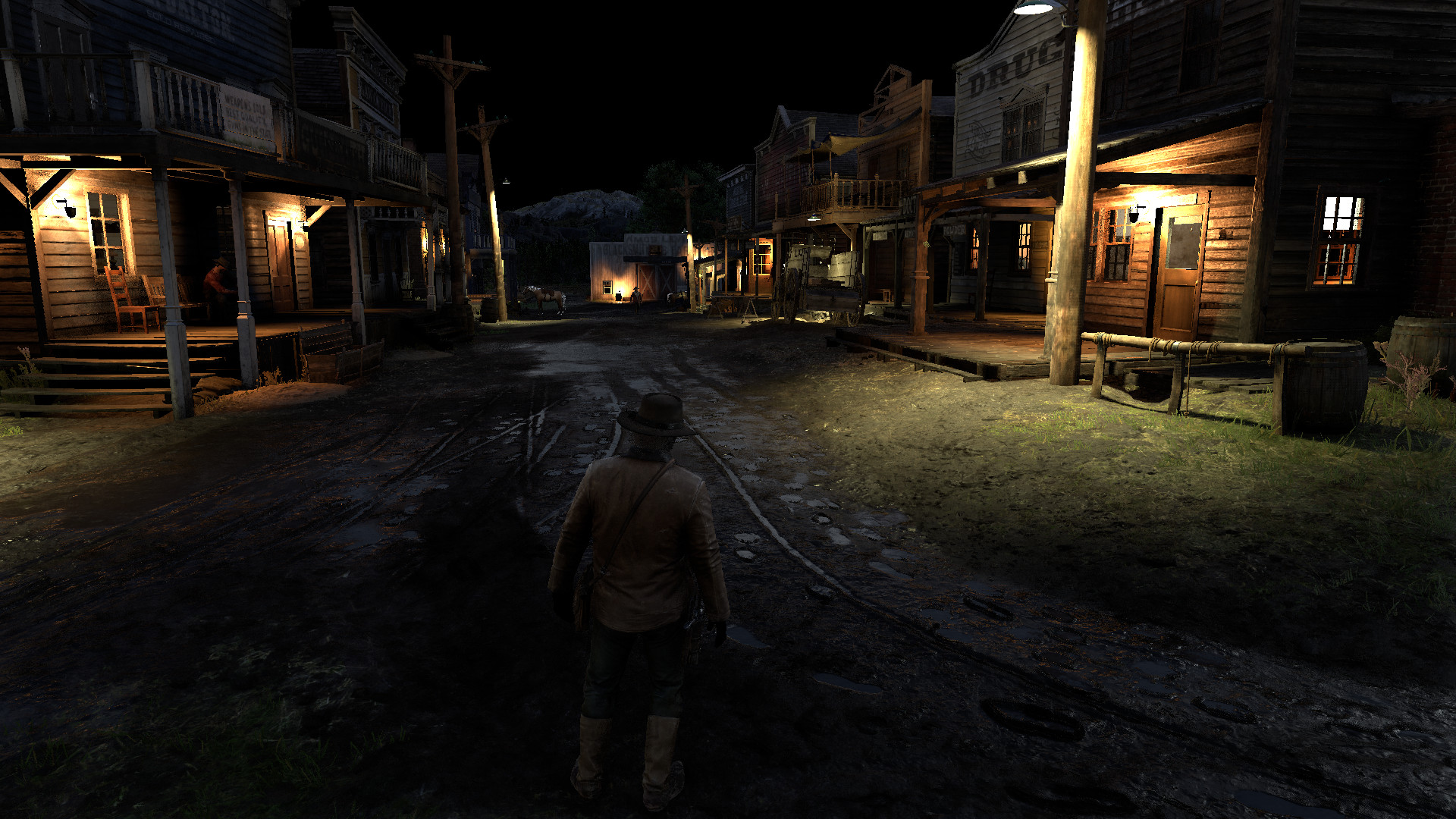 I won't be covering water rendering in this post because it deserves a special blog post. But I want to talk a little bit about reflections:

But this forward pass can be expensive because:

To achieve correct blending, you have to render back faces of an object first and render its front faces second. Because of that, most of the translucent objects in this stage are being drawn twice. 2D-quad-like objects(like windows) are rendered once.

To be able to switch between front face and back face culling, you have to change pipeline states. And those changes can be expensive.

There is another render target generated in this stage for the bloom effect. This target stores the intensity of bloom. As you can see in the picture, translucent objects glow more. 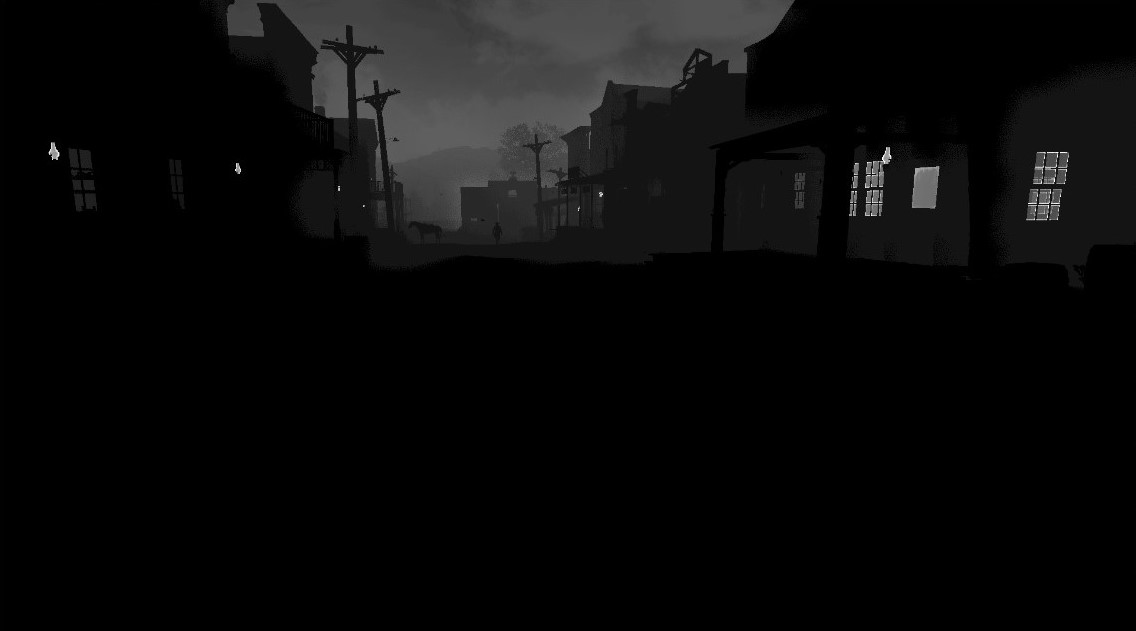 Note that the bloom intensity increases at far distances to get more glow in foggy areas.

This is the stage where temporal antialiasing, bloom, motion blur, depth of field, and other effects are executed. I am planning for another blog post just for post processing. So, I won't talk about much in here but I want to talk a little bit about the bloom. There is already glow of lights on the main render target thanks to volumetric lighting.

Then the game combines this filtered bloom target with the main target along with the bloom intensity target.

What a quite ride! There is so much more to talk about but I don't want this blog to be too long. I'd like to share my conclusions about all of this and some odd things that I've found along the way.

Don't get me wrong, I don't blame anyone here (Well... I'm little upset about low framerates), I'm trying to understand why these decisions were made. After all, lots of talented people crunched hard on this game. It is likely that they didn't have enough time to optimize the game further.

Well, that's it! RDR2 is a gorgeous game to look at. Not just for graphics techniques but the art, the lighting, everything looks phenomenal. I've fallen love with the color palette of this game. Especially at night times, it reminds me of The Assassination of Jesse James by the Coward Robert Ford, No Country for Old Men, and other western movies that shot with 35mm cameras.

If you find anything that is wrong or can be improved, please feel free to contact me. I will update this article when I got more information. Please, comment, share and enjoy.